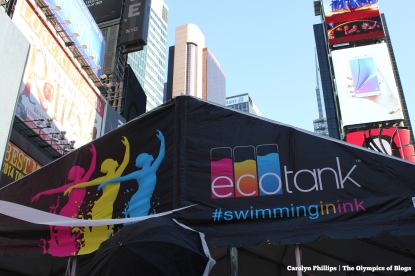 You don’t get to see the U.S. Synchronized Swimming team performing in Times Square every day. Thank goodness I was there to see it happen on September 24! The synchronized swimmers performed routines every fifteen minutes in a large tank in the middle of Times Square near the TKTS steps, and it was so cool!

The whole event was designed to promote Epson’s new printer, the ecotank. There was a tent set up next to the tank that was filled with printers, so people could actually try them out. This event was called #SwimmingInInk because the synchronized swimmers were actually swimming in a tank, which represented the printer, with four colors, which represented the printer’s ink. It was an ingenious way to market the new printer.

I watched the routines for a very long time because the performances were so captivating. I loved watching them!

Here are some more photos: 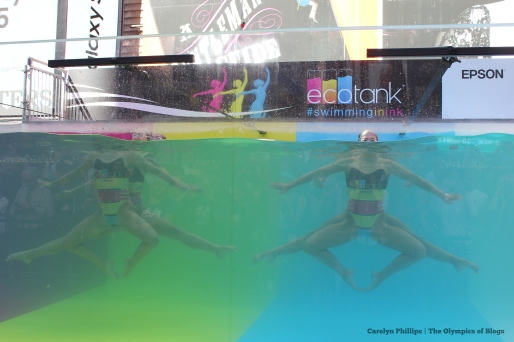 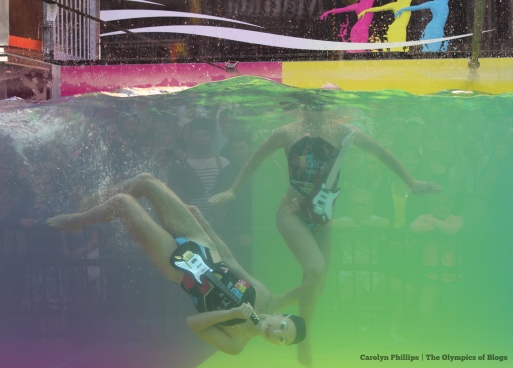 The swimmers wore different swim suits depending on what routine they were doing. I was able to talk to the creator of the suits, Andrea Robertson. Her company, Triflare, creates very bold and colorful activewear for triathlon athletes. The U.S. Synchronized Swimming Team will wear these beautiful suits at the 2016 Olympics!

Inside the tent full of printers, there was a Step and Repeat where you could take a photo with some of the synchronized swimmers. I was lucky enough to have mine taken with two synchronized swimmers, Anita Alvarez and Mariya Koroleva, who already qualified as a duet for Rio! 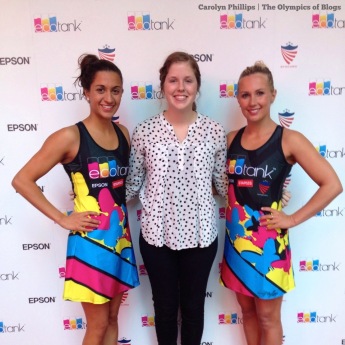 Kerri Strug, one of my favorite Olympians, was at this event as well! She spoke during a few of the breaks between the routines and gave the synchronized swimmers advice about the Olympics throughout the day. 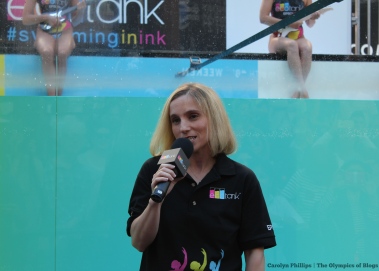 Kerri Strug competed at the 1992 Olympics and won a bronze medal in the team competition; however, her real Olympic moment happened at the 1996 Olympics in Atlanta. Here’s a video on what happened:

Kerri Strug is a true Olympic hero and truly speaks to beauty of the Olympic Movement. I’m so happy that I was able to meet her and ask her a few questions for this blog. I asked her what her favorite part of the Olympic Movement was, and she replied that it was the athletes because they show everyone that achieving your dreams is possible. I also asked her if she was planning on going to the Olympics in Rio, and she said she wasn’t sure. She’s been to every Summer Olympics since Atlanta, but she usually doesn’t know until closer to the date.

She was only able to talk for a little because she had to leave for the airport, but I was so excited about every second of it. It’s amazing to have met one of the Olympic heroes that inspire me, and I think it’s awesome that she was able to help the aspiring U.S. Synchronized Swimming Olympic athletes. #SwimmingInInk was a success for U.S. Synchronized Swimming, Epson’s ecotank, and The Olympics of Blogs! 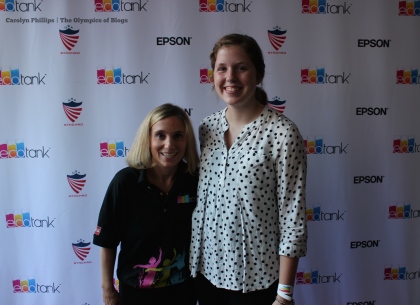 7 thoughts on “The Things You See In Times Square”