Here is a really amazing blog post written by my friend, Lili. She’s been studying abroad in London since January, and she’s been going on such amazing adventures! Recently, she journeyed to Lausanne, Switzerland, home of the Olympic Museum, and from what she wrote, it sounds like such an awesome museum! If you are interested in reading more about her travels or about any books she’s reading, check out her beautiful blog at http://lilisreflections.blogspot.com.

Thank you so much for having me on the blog today, Carolyn!

I went to Switzerland in the beginning of March to visit a friend, and she just so happens to live in Lausanne… the headquarters of the International Olympic Committee! I took advantage of this awesome opportunity by spending a day in the Olympic Museum.

When you first walk in, you are greeted by a test track with the 5 rules of the Olympics listed: Fair Play, Excellence, Respect, Friendship, and Peace. This sets the tone of your entire visit because it symbolizes what the museum is all about. If you come from the opposite direction, you’ll climb a staircase full of dates and locations, which end up being the hosts of all recorded Games in years’ past. Pretty cool.

The museum starts you off by teaching you the history of the Games, bringing you through exhibits of what the original Games were like all the way through an exhibit on the life of the father of the modern Games. This entire first floor is very educational. I think the coolest fact that I picked up is that in the original Games in Athens, there were twelve Zeus statues on the ground to inspire athletes. Each of these statues was bought and paid for by a past Olympian that was caught cheating and exiled from the games. Their names were often etched into it, so they forever lived in shame. 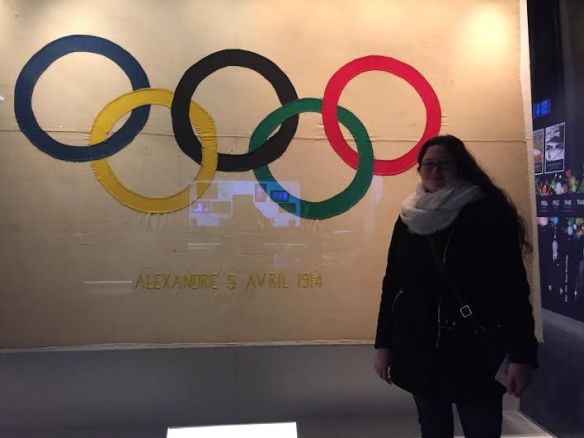 This exhibit also took you through the history of the Olympic flag. Originally it was not the five ring symbol we know and love today. And, on top of that, when it eventually became the five rings we know today, the regulations of the time prohibited the rings from properly interlocking. So the symbol we know today is still relatively young in the grand scheme of things. It was really cool to see one of the first and oldest surviving Olympic flags with today’s modern symbol. 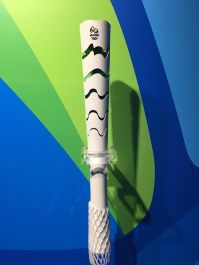 What stood out to me, though, was the torch exhibit. They have an actual torch for every single Games displayed and watching them transform and become more intricately detailed with each passing year was astounding. Plus, they have a Rio torch on display that I excitedly touched just to be able to say I did. Let me tell you, she is a beaut.

The next floor has some crazy history exhibits with so many interactive opportunities that you can spend hours here. Everywhere you look you could find famous outfits and equipment belonging to athletes that revolutionized their respective sport. You can then scroll through iPads at each station, select an athlete, and read in-depth bios and watch record-breaking videos of Olympians who I wasn’t alive to view myself on television. 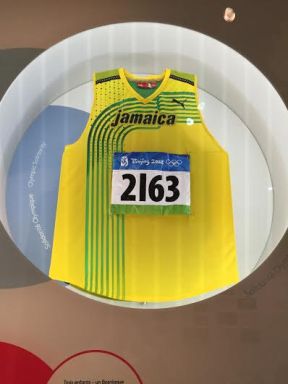 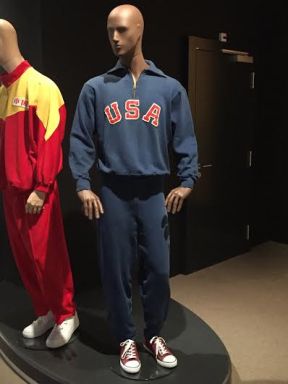 The best part of this level, however, is the video screen. They have every single Olympic Games on it, and ten different ones can be viewed at once. You pick an Olympics, and you can view a 5 to 10 minute video about that year’s importance…the athletes that revolutionized sports, new sports introduced, any historical controversies—I found the video of the Games hosted under Hitler to be especially fascinating for this reason. I must have spent a solid hour there, scrolling through every year I have been able to watch on television, a few historically important ones, and the Games hosted in any city I’ll be visiting in the future out of sheer curiosity.

The third and final level of the museum is all about the athletes. You walk downstairs and there’s a ton of mannequins dressed in the old workout clothing of each country. There are simulators for you to test balance, reflexes, speed, etc. at the rate of an Olympic athlete, and they make you feel like you are so out of shape you should never get off the couch. There are interactive booths that let you sit down and view special interviews set up with famous athletes that simulate an environment where it feels like they’re talking directly to you. There’s an entire section on doping where I learned I’d be a really bad judge of character because I took a test just to be told I have no idea how to properly spot people doping. It’s all so interesting really.

But the best part is at the very end. They have the medal room. An entire room featuring a silver, bronze, and gold from every Olympics ever. It’s so fascinating to see the basicness of Athens 1896 (the gold was unfortunately missing to be cleaned) to the intricacy of Sochi 2014.

Right before you exit, you stumble into an actual Olympic podium from Sydney’s 2000 Olympics. Naturally, I needed a picture, and you know, I obviously went for the gold. Do you blame me? 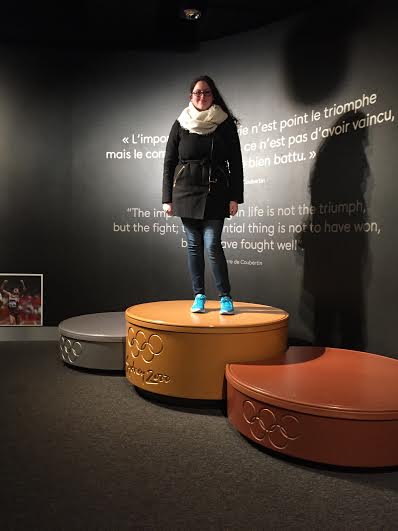 This museum is one of the coolest things I’ve ever seen. I love museums and often wander off on my own when exploring them because my friends aren’t as into them as I am, but this is a museum that even the most reluctant museum goer will be interested in. Heavy on interactive experiences, you decide how long you spend in there by indicating what you are interested in and exploring with that in mind. I would go back if I ever find myself in Lausanne, Switzerland again. I will say this: Lausanne is a one-day kind of trip. While it holds such importance to the Olympics it’s a very small city with not a lot to do, so the Olympics Museum is more like a stop-over on a larger journey to, say, Interlaken or Bern, but it is a stop-over that is so, so worth it.