To me, every day is Olympic Day (especially when it’s one more day until I leave for Rio!), but Olympic Day is also a day celebrated every June 23 to commemorate the birth of the modern Olympic Games in 1894. Every year from May 31 to June 30, communities and programs around the United States organize events to celebrate the day. Before my internship at LA 2024, I had never been to one of these events.

On Thursday, June 23, the LA 2024 Olympic and Paralympic Bid Committee and the LA84 Foundation, which was formed with the profits from the 1984 Los Angeles Olympics, hosted an Olympic Day celebration in the Los Angeles Memorial Coliseum. Over 500 youth in the Los Angeles community came, and after the Opening Ceremony, they were able to learn and play Sitting Volleyball, Volleyball, Archery, Rugby, Soccer, Fencing, Rowing, and Badminton. 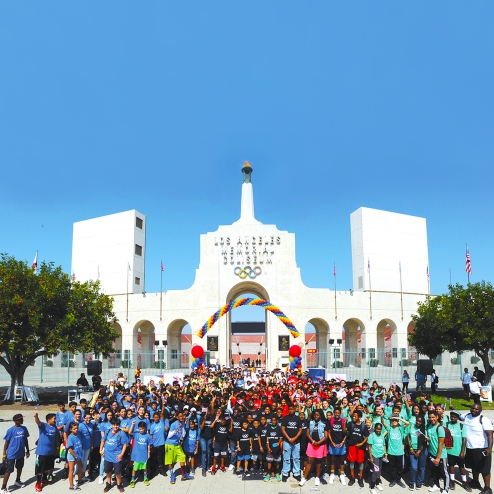 We started the day off by arranging all of the students into the Olympic rings, which was kind of difficult but very cool. After creating the rings, each group went off to its station to learn the rules of the sport and try it out.

During the day, I was also able to learn a few new sports. I tried Sitting Volleyball, a Paralympic sport where competitors are only allowed to sit on the ground while playing. This was so much fun! I never enjoyed playing Volleyball in gym, but I really liked this.

I also learned a little Fencing from a very energetic coach. Before this, Fencing always seemed too foreign for me to understand, but she broke down how to play it for me. Although it was really hard (so much to think about!), I enjoyed the little private lesson, and I would like to try Fencing again. I’m really excited to watch Fencing at the Olympics because now I have a little more understanding of the sport and how it feels to do it.

Toward the end of the day, I tried Rowing. Because they weren’t able to bring a place where you could actually row onto the field of the Coliseum, they had rowing machines set up. I had used them before in high school gym class. Now I know what they’re really meant for because the person at that station talked me through what the motions on the machine stimulated in actual Rowing.

This day was really fun, and it made me very excited for the start of my internship. A little less than a year ago, I had been in the stands of the Coliseum watching the Special Olympics Opening Ceremony happen on that same field where I stood on Olympic Day. While watching all of the kids try out different Olympic sports with the cauldron burning above the field, I was really inspired. It felt right for Los Angeles, and it felt right for me. The cauldron of the Los Angeles Memorial Coliseum, the place where the 1932 and 1984 Olympics, the 2015 Special Olympics World Games, and Olympic Day began, will hopefully light up at the Opening Ceremony of the 2024 Olympics, and maybe some of the students from Olympic Day 2016 will be there competing.

For faster updates while I’m at the Olympics, follow the Olympics of Blogs on Instagram @theolympicsofblogs. I leave on Monday!