When I was at the Rio 2016 Olympics and the LA 2015 Special Olympics World Games, I traded a lot of pins with people from around the world. I’ve noticed that some people are very serious pin collectors, and there were even some at both Games who were probably only there for the pin trading! I do it because it’s a great way to start a conversation with people from other countries and because it’s fun!

Since pin trading is such an important and fun part of the Olympic Movement, I’ll showcase one of my pins on my blog every Tuesday for Trading Tuesday.

To start Trading Tuesday, here is an Olympic pin that my sister gave me for my birthday. She got it last summer when she went to Russia, and it is so cool because it’s from the Moscow 1980 Olympics. The bear, Misha, was the mascot of the Games. I love how his belt has the Olympic rings on it! Team USA boycotted those Games, so I doubt there are very many Moscow 1980 Olympic pins in the U.S. It was such a surprise and so awesome! Thank you, Liz! I was so excited about it.

Two cities, Moscow and Los Angeles, bid for the 1980 Olympics. Moscow won, and it was the first Olympics to be held in Eastern Europe. The United States led a boycott after President Jimmy Carter gave Russia an ultimatum: either the Soviet Union would withdraw its troops from Afghanistan or the U.S. would boycott the Olympics. The Soviet Union didn’t withdraw, and as a result, over 65 countries and regions including the U.S. boycotted the Games. The map below shows all the countries that didn’t compete.

As a result of the United States’ boycott of the Moscow 1980 Olympics, the Soviet Union and 13 other countries boycotted the LA 1984 Olympics. 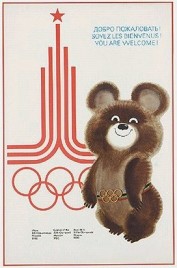 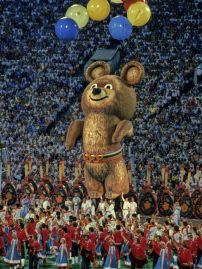 Above images from left to right: Misha the mascot with the Games’ logo, a Misha balloon at the Closing Ceremony, and Misha on a commemorative stamp. He’s a really cute mascot! 😀