After the Games, then Chicago Mayor Richard Daley said, “You know, Eunice, the world will never be the same after this.” And it never was. Today, there are 4.9 million athletes who participate in Special Olympics in 223 national and U.S. programs in 172 countries, and there are over 1 million coaches and volunteers.

After drafting the resolution, I went to the Pennsylvania State Capitol, and even though the House of Representatives wasn’t in session, they were still working. While waiting for them to return from meetings, I found this painting in the Capitol showcasing Pennsylvania’s relationship with Special Olympics. It’s “Rare Halo Display: A Portrait of Eunice Kennedy Shriver” by David Lenz.

I asked Representative Gene DiGirolamo (R-Bucks) to sponsor my resolution, and he was honored. In 2013, he had won the John F. Kennedy Memorial Award because of his efforts as an advocate for people with physical and intellectual disabilities, individuals with mental illnesses, and the importance of drug and alcohol treatment and prevention. 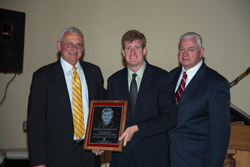 Left to Right: Representative DiGirolamo, former Congressman Patrick Kennedy, and Tom Dunkin, Chairman of the Board of the Northeast Community Center for Behavioral Health

In total, the resolution had 30 co-sponsors in addition to Representative DiGirolamo. Because he had to wait for the House to come back into session, the resolution was unanimously adopted September 11! Click here to read it.

Thank you to Representative DiGirolamo, my dad, and the co-sponsors for all their hard work in helping me get this resolution passed!

Area M, the Special Olympics region in PA where I live, brought 5 coaches and 18 swimmers to the Summer Games. Some of them were athletes I’ve been coaching since January, and it was so exciting to see them compete and win! Others were athletes I just met on Thursday, but we quickly became friends.

We left early Thursday morning and took a school bus to Penn State. I sat next to an athlete who was really kind and friendly. He runs his own private eye and matchmaking business, so on the ride there, he told me all about them. We were on the same bus as the Softball team, and I found out that many of the swimmers and softball players have been coming to the Summer Games for over 20 years!

When we got to Penn State, we quickly checked into the dorms, and then it was time for the first day of competition. We were lucky to have beautiful days the entire time we were there.

That night, it was the Opening Ceremony, and one of the Area M swimmers had been selected to light the torch! That was so exciting because she was one of the athletes I’d been coaching since January. Everyone in the Area M section cheered really loudly for her as she lit the torch with some police officers, and the Games were officially open!

The next two days were filled with a lot of swimming, getting to know the athletes really well, early mornings, late nights, the Athlete Dance, SportsFest, a trip to the Creamery (for ice cream!), and then it was time for us all to go home.

I was exhausted by the end, but I would do it again. I really liked getting to know the athletes. It was the most removed I had been from the actual operations, but the closest I’d been to athletes at a State Games. I definitely made a lot of great friends, and I wish all of them luck with their Fall sports!

Here’s a video I made to sum up my experience!

It’s amazing to believe that it’s already been a year since I interned at the Special Olympics Southern California Summer Games! Here’s my blog post about it to get you in the Summer Games mood! https://theolympicsofblogs.com/2016/06/27/special-olympics-southern-californias-summer-games/

I leave today for the Special Olympics Pennsylvania’s Summer Games! This is my first time going to a State Games as an Assistant Coach, and I’m excited. I’ll be helping coach swimming with many of the same athletes I’ve been coaching since January. I can’t wait to see how well they do!

The competition starts today and goes until Saturday, June 3. Over 2,000 athletes from across Pennsylvania are coming to Penn State to compete in Aquatics, Athletics (Track and Field), Basketball, Bowling, Equestrian (Horseback Riding), Golf, Gymnastics, Softball, and Tennis.

Check back here after this weekend to see how it goes!